NEW IN THE PAPERBACK EDITION

In this new edition, Putnam and Campbell bring new data to bear on the ever-changing religious and political landscape in America: the Great Recession, the rise of the Tea Party, and the increasing prominence of anti-religious voices. Having interviewed thousands of Americans for the first edition of the book, they have now re-interviewed the same people five years later, in order to find out what has changed and what has stayed the same.

These new findings only add to the wealth of material in American Grace. In this monumental, fascinating, and often surprising study, the authors examine the complex interaction of religion and politics over the past half-century and provide a nuanced balance sheet of how religion both contributes to and detracts from the vibrancy and stability of American democracy. They analyze how the current alliance between religion and conservative politics was built, and sketch the possible outlines of a completely different political-religious alignment. Moreover, they address the great puzzle of religion in the United States, which is largely unrecognized by most Americans because they have never known another reality: America is unusually religious, unusually diverse religiously, and yet unusually tolerant. In most countries, intense religiosity combined with stark religious differences equals wars, violence, and civil disorder. Why, the authors ask, have we not torn ourselves apart along the religious fault lines that have increasingly come to divide us?

RELIGIOUS POLARIZATION AND THREE SEISMIC SOCIETAL SHOCKS As the data from the authors’ Faith Matters surveys from 2006 and 2007 — and the 2011 follow-up survey — show, Americans are increasingly concentrated at two opposite ends of the religious spectrum—the highly religious of many faiths at one pole, and the avowedly secular at the other. The moderate, essentially nonpolitical religious middle that dominated America’s religious landscape in the decades immediately following World War II is shrinking.

But the nation’s religious polarization has not been a process of smoothly proceeding change, the authors say. Rather, it has resulted from three seismic societal shocks. The first was the socially tumultuous, sexually libertine 1960s, when religious observance drastically declined, especially among the young. This turbulent period then produced a prudish aftershock of growth in conservative religion, especially evangelical Protestantism, and its vastly increased presence in the cultural and political arena. As theological and political conservatism began to converge, religiously flavored issues like abortion and homosexuality emerged on the national agenda, and “religion” became increasingly associated with the Republican Party. But that expansive evangelicalism peaked in the early 1990s.

According to Putnam and Campbell, the first aftershock was followed by a second aftershock, whose effects are still unfolding and have the potential to fundamentally reshape America’s religious and political landscape. In this second aftershock, a growing and unprecedented number of Americans, especially young people, have come to disavow religion entirely. For many, their aversion to religion is rooted in unease with the association between religion and conservative politics. If religion equals Republican, they have decided that religion is not for them.

But as Putnam and Campbell found, only a tiny percentage of Americans who claim no religious affiliation see themselves as atheists. Many consider themselves spiritual and stand on the edge of a religious tradition, with one foot in and one foot out. Against this rapidly shifting backdrop, there is an opportunity for religious “entrepreneurs” to develop new expressions of faith that will respond to changing times and engage new types of worshipers, as American religion has repeatedly done throughout our history. The “emerging” church profiled by Putnam and Campbell has attracted young people by combining modern technology with traditional symbolism and an emphasis on good works rather than theology. But the future of this new movement remains unclear. In the political sphere, there is an opportunity for the Democrats to reclaim the religious mantle and for Republicans to recalibrate their relationship to religion, enabling either party to build a new governing coalition. For religion will surely continue to influence our politics, and vice versa—the only question is how.

RELIGION AND SOCIAL CHANGE IN AMERICA How, Putnam and Campbell ask, has religion influenced and been influenced by the extraordinary social changes that have taken place in America over the past fifty years—including the civil rights movement, the feminist revolution, increased immigration and ethnic diversity, and growing income inequality? Again, the answers are intriguing and often unexpected.

THE RELIGIOUS MIXING BOWL In the authors’ view, the First Amendment is part of the explanation for America’s high degree of religious tolerance. With its guarantee of freedom of religion and prohibition of state support for religion, it has helped to foster an exceptionally vigorous religious “marketplace.” But an even more important part of the explanation, Putnam and Campbell say, is that America has to a remarkable extent become a religious mixing bowl. Some of their most interesting findings concern the role of religion in the intimate daily lives of Americans, which faiths are gaining and losing members, and the ways that Americans of different faiths view one another, such as:

When Americans rate how they feel about members of other religions, Putnam and Campbell find:

In spite of these differences in how religions are perceived, Americans have a remarkably high level of religious tolerance. Eighty-nine percent of Americans – including 83 percent of evangelical Christians – believe that a person who is not of their religion can go to heaven. A large majority of Americans maintain this belief, even when the overwhelming majority who are Christian are specifically asked if non-Christians can go to heaven.

In recent years, the bestseller lists have been filled with books highly critical of religion, which have been answered by equally fierce rebuttals from religion’s defenders. Meanwhile, television’s talking heads and talk radio’s provocateurs use heated, hyperbolic language as they seize upon religious controversies to stoke America’s purported “culture wars.” Neither an apology for religion nor an attack upon it, American Grace provides a balanced and considered counterweight to this polemical rhetoric as it presents an illuminating and penetrating assessment of both the pros and the cons of religion as lived in America today. Fact-based and fair-minded, it aspires to explain religious Americans to secular Americans, secular Americans to religious Americans, and religious Americans to one another. All parties in the ongoing debate about religion, atheism, and politics in America will be both captivated and challenged by it. 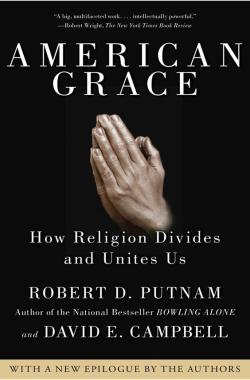 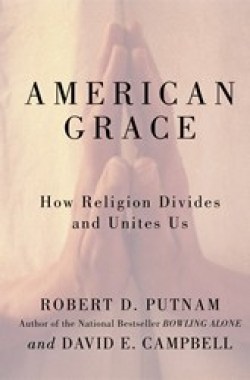